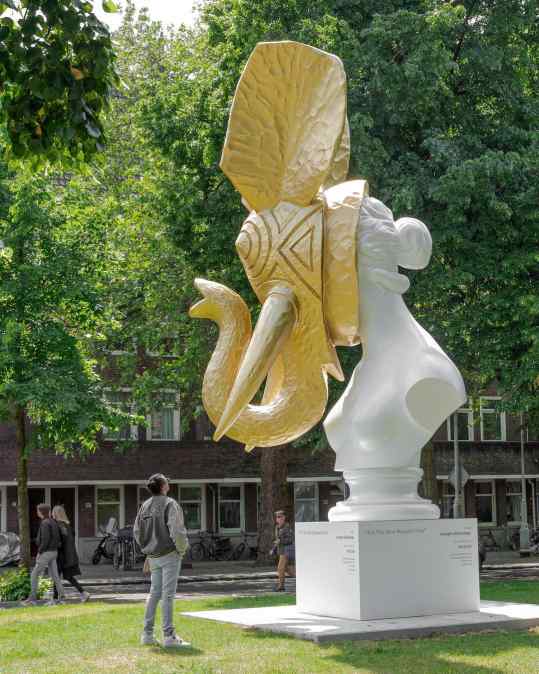 So many people ask me about my story and inspiration that lead to the creation of this large sculpture in Amsterdam.. 💭 here is the story: “For The Most Beautiful One” stems from an inner journey the artist made into his youth memories, tracing the origins of his artistic inspiration. Klibansky wants to communicate the importance of diversification in society, something he grew up with in his own household. Joseph Klibansky was born in Cape Town, South Africa in 1984, from a South African father and a Dutch mother. His childhood has always been filled up with valued artifacts from all over the world: Greek and Roman sculptures mixed with African masks, wood carvings and relics, as well as contemporary art pieces — which have heavily influenced his style and composition. In the larger-than-life sculpture titled “For The Most Beautiful One” all these inspirations meet. Inspired by the myth of Aphrodite and the Judgement of Paris, the sculpture references a traditional female torso from the Greek era on a colossal scale.   In the myth, Paris determines Aphrodite as the most beautiful of all the goddesses on Mount Olympia, giving her the golden apple. Klibansky’s intentional use of gold is a clear reference to the apple given to the most beautiful one, Aphrodite. Nevertheless, Klibansky’s artwork epitomises his link and fascination with African culture by introducing a mask freely inspired by the wooden elephant masks produced by the Bwa and Bobo peoples, native of Burkina Faso.  The wooden masks were worn during religious rituals thought to manifest certain blessings by “the gods” By moulding together classic and African tradition, the artist achieves to create a new narrative where visual languages from different cultures have equal importance. #josephklibansky #artzuid #monumentalsculpture #kaws #picasso #africanmask